Getting tested is no longer a complicated issue.. Feel free to get to any testing center and know your status. The medical personnel will help you get tested there and then. At Kafophan we don’t offer testing services but we always guide you and can counsel you on your status.

Three years ago, Mose Karuhanga Matovu was broke and bored. Then 29, he had lost his parents suddenly and with them his ties to the rural community in south-western Uganda where he lived. He decided to head east – to the Ssese islands in Lake Victoria – where he hoped to earn a living as a fisherman.

He rented a home on Bugala, the largest of the 84 islands, and fell quickly into a fisherman’s lifestyle. He would spend days at a time on the water fishing for Nile perch, tilapia or the small silver mukene fish, braving sudden storms that could capsize the boats of the most experienced fishermen. Then, if he was lucky, he would return to shore with a catch worth hundreds of dollars – money he might spend on locally brewed gin and, occasionally, a sex worker.

Moses assumes that is how he contracted HIV. Though he was aware of the risk, he tried not to think about it. He only agreed to get tested for the virus earlier this year because it was free and he was already at the health centre, trying to get treatment for a nagging cough.

Aside from the initial shock of the result, he said having HIV has not been nearly as terrifying as he assumed it would be. He credits the antiretroviral therapy (ART) he was given immediately after being diagnosed – a combination of three drugs that he must take daily to keep the virus in check.

“Sometimes there is dizziness,” he said. “But otherwise I have felt well.”

In most Ugandan health Centres, the drugs are not available to HIV patients until their CD4 count – a test measuring how effectively the body’s immune system is fighting off the disease – has dropped below a certain threshold. But not on the Ssese islands. Anyone living there who is diagnosed with HIV immediately receives ART – a process known as “test and treat”. The policy puts Uganda on track towards WHO recommendations, calling for all HIV patients to be enrolled on ART as soon as possible.

“It’s the only job that I saw, with the strength I have, that could give me money,” he said.

Last year, the Ugandan government began rolling out test and treat within communities at high risk, called “key populations” – people who maintain high HIV transmission rates, but are often difficult to reach. In Uganda, this means sex workers and long-distance truck drivers, as well as people living in the highly transient fishing communities – where HIV rates are often more than double the national prevalence of 7.2%.

An official with the country’s Aids control programme, said the service started in 2013 as Uganda attempted to stem a rising HIV rate. Test and treat is also available around the country for children under 15, pregnant women and patients who have tuberculosis or hepatitis B.

The official said the programme has been successful, with anecdotal evidence so far suggesting a reduction in HIV transmission rates. 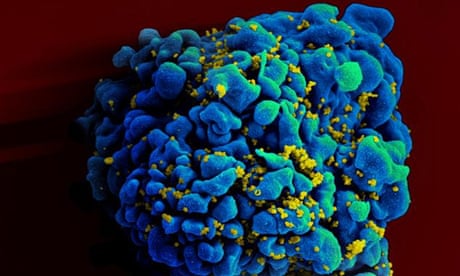 People with HIV live almost 20 years longer than in 200

Still, there was some concern as test and treat was being rolled out that the transient patterns that made it difficult to provide HIV services to fishing communities would also undermine their treatment. If patients enrolled and then stopped taking their antiretrovirals, they could develop resistance to the medications – making it more difficult to treat them in the future.

Filliam Kerunega, a senior clinical officer at the largest health centre on the islands, admits he was sceptical of test and treat when it first became available. After 24 years working in Ssese, he has grown used to fishermen missing appointments or dropping out of treatment as they move around in search of a better catch.

“It becomes a challenge in terms of follow-up,” Kerunega said. “You do not know which direction they have taken and you find [that] some of those people don’t have even [a] telephone contact.”

His worries have been allayed over the past year. It turns out that if fishermen or their family members are immediately put on ART – instead of being told to come back repeatedly for CD4 tests – and are convinced that sticking with the daily regime will save their lives, they appear more likely to do so.

After his diagnosis earlier this year, Karuhanga began scheduling his fishing trips around his monthly visit to the health facility to pick up his antiretrovirals.

Developed by Think Up Themes Ltd. Powered by Wordpress.